On Friday, August 30th Gatekeeper will enter the studio to record new music for a follow-up release. Three songs shall be recorded, they are called "Vigilance of the Guardian", "Angelus Noctium" and "The Bell of Tarantia". The upcoming tracks will be a different side of Gatekeeper, but pure Epic Heavy Metal from start to finish. Fans of "Prophecy & Judgement" will be pleasantly surprised. Folks who didn't like our debut probably will be as well. We are planning on using these tracks on a split release with another fine Epic Metal band from recent years. More details on that later.

Stay tuned for updates from the studio, as well as updates on the progress of our upcoming live album "A Shadow Over Calgarae" from Swords and Chains Records. Preorders shall start very soon.

Until then.
Transcribed by Gatekeeper at 09:56 No comments: 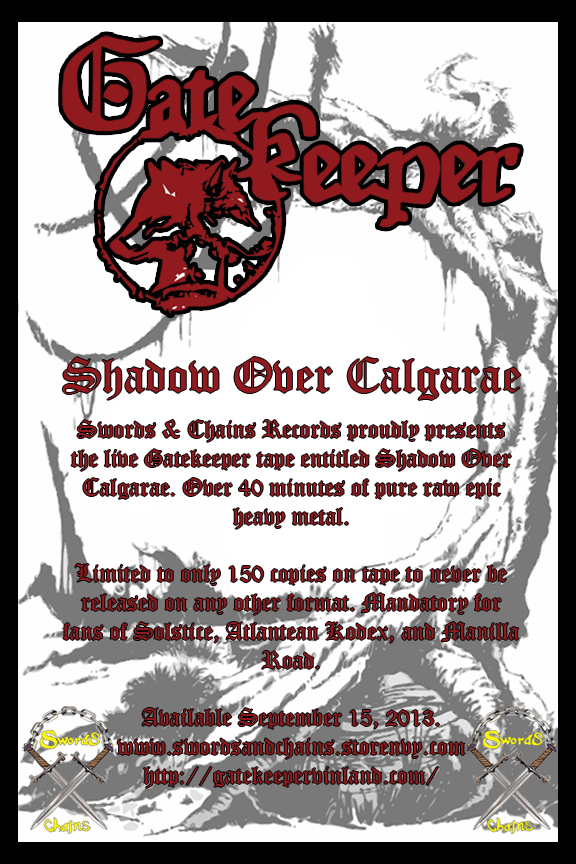 It is as they say. Our debut Calgary performance from April 06th immortalized into pro cassette format. Rough and raw, just the way we like it. There will be no pro-tools abuse, no quantize, no punch-ins and no pitch correction: Just a mic covered in old beer next to the mixing board. Eternal blessings to Mike Mendyk for going above and beyond with this release, it's going to be fantastic. Stay tuned for pre-order info and more juicy announcements in the near future.
Transcribed by Gatekeeper at 00:44 No comments:

First and foremost, take note that we are using a shorter, more convenient web address for this blog page. It can now be accessed at http://gatekeepervinland.com

Secondly, the Priestess of Delphi shirts are now available to order, sizes S-XXL are available. 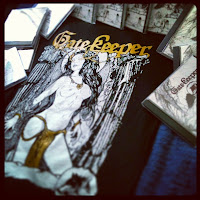 Our triple gig attack (Farmaggeddon, Calgary, Edmonton) was an absolute blast. Was great to see our sets decently-attended and lots of energy throughout. We have been playing two new songs which we will hopefully track before the end of summer. Huge thanks to the IRON KINGDOM folks for inviting us to play the shows with them and for being a class act all around. Keep your eyes peeled for BLOODREICH in the future. Their singer was a dead-ringer for Eric Adams. GATEKRASHOR fucking ruled! Easily the best I'd ever seen them play. ARSENAL was a great thrash outfit, perfect way to start the evening. Thanks for MAJOR CHAOS for playing some rad covers at the Edmonton gig.

Our further blessings go out to Cody & Harley at Rattlehead Productions (Calgary), Rod Gillis (Edmonton) and our drummer Tyson Travnik + co. for their hard work and dedication into making Farmaggeddon happen. Thanks to Snipers Paintball, DV8 Tavern and Dickens Pub for hosting the events. Credit is due to Kylee Thompson and Shannon Steele for their fantastic photos to commemorate our sets. 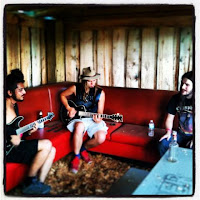 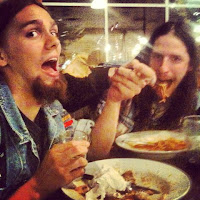 Announcement about a new release at the end of the week.


Transcribed by Gatekeeper at 20:41 No comments:

We are pleased to report that GATEKEEPER shall support IRON KINGDOM in Edmonton on Saturday, August 10th at DV8 Tavern's new location on Gateway Blvd, next to Hudsons on whyte ave. Gatekeeper will take the stage first, followed by local support MAJOR CHAOS and then our new friends in Iron Kingdom closing the night. We are looking forward to decimating DV8's new room with their updated sound system and larger stage. Show up early, get tipsy and bang your manes.

See you mongrels at FARMAGGEDDON. 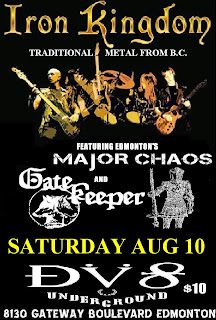 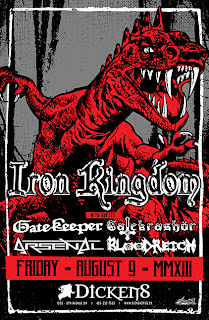 Transcribed by Gatekeeper at 07:35 No comments: