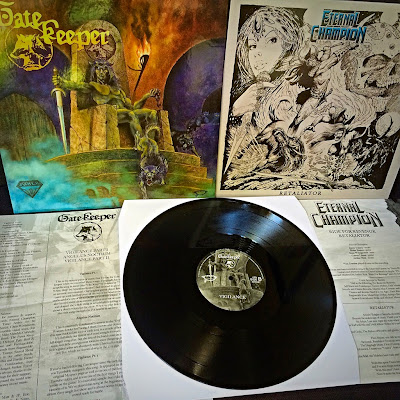 Vigilance/Retaliator split LPs are available! Band copies are severely limited so these will ONLY be available for purchase at live shows, NOT ONLINE. I know that's a pain in the ass for our North American fans but we need to be fully stocked for our big Farmageddon gig coming up in June. If we have any copies left after the festival, we might put them online.

For those who want 12" of hard black wax, head over to >>> NO REMORSE RECORDS <<< and snag yourself a copy! They are a great label and deserve the support. The records are limited to 300 copies featuring the gorgeous dual-artwork and liners notes/lyrics. Black wax only.

In other news, the live cassette Shadow Over Calgarae is OFFICIALLY SOLD OUT! I mailed out the last two copies today. Swords and Chains Records has been sold out of theirs for a while now too, so that's it! As always, the support we receive from our small (but mighty) fanbase floors us. Thank you.

In further news, >>> FARMAGEDDON FESTIVAL <<< is a rapidly-approaching dot on the horizon! We hope to see some faces both strange and familiar when we hit the stage a ~6:00PM on Sunday night. Can't wait to raise a few pints to Grim Reaper.

Still no word on the upcoming split with Funeral Circle. Will report back as soon as we know something.

'Til the next,
Jeff Black
Transcribed by Gatekeeper at 19:03 No comments: