New Shirt design now available. White + Metallic Gold ink on Black thread. Also features the text "Prophecy & Judgement MMXIII" on the back. These shirts are $20 + shipping, available in sizes S-XL. We posted them on Facebook an hour ago and have sold many in the first ten minutes, so order fast.

gatekeeper(at)live.ca
Transcribed by Gatekeeper at 13:28 No comments:

A Shadow over DV8

GATEKEEPER will rock DV8 Tavern on The Sabbath Day, April 7th. We will be supporting local Hellions RUNEBLADE and our new friends from Manitoba, WILT. We will have new CDs and shirts, come get your skull crushed before you earn your paycheck. 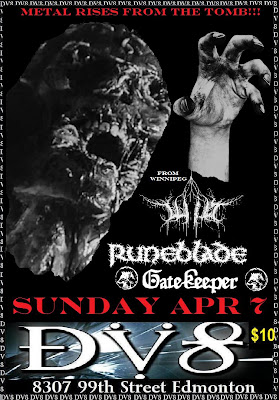 Transcribed by Gatekeeper at 19:56 No comments:

A shadow over Calgary

In light of the cancellation of TORMENT IN FIRE festival, Gatekeeper has hooked up with Rattlehead Productions for a performance on Saturday April 6th at Dickens Pub, Calgary. This will be the official release party for the Prophecy & Judgement EP, we will have copies of the CD available for purchase, as well as our new t-shirts.

We are extremely excited to be performing in Calgary alongside Dark Forest, Wilt, Vile Insignia and This is War. Come, or be doomed.

Transcribed by Gatekeeper at 09:42 No comments:

We recently did an interview with Musikreviews.de which is now online for your viewing displeasure. For those wishing to read in German, please check out the link. I have also pasted the English version of the review below for those so inclined.
Interview in German

Tell me about the formation of the band and what makes you special in this constellation.


I originally started the band on my own back in 2009, recording demo tracks with programmed drums at home. I'm relatively new to playing guitar, so writing the riffs and songs for Gatekeeper was a way to teach myself the instrument. I put up a few sample clips of songs on Youtube and myspace, and a few people in bands that I enjoy got in touch with me and recommended that I turn Gatekeeper into a real band and do some proper recordings. I called up Tyson, Leillyn, Shorre and Justin and they were all into the project. Here we are now.
As far as what makes us special... Well, I think that might mean something different to everyone that enjoys the music. For me, this is the most honest music that I can create. No doubt about it, we wear our influences on our sleeves. It's epic heavy metal created by heavy metal fans, for heavy metal fans. There's a vastness in the songs that is very inspired by where we live: The wide, open prairies of Alberta, which are often covered in snow.

What do you want to express with the name Gatekeeper?


It's a bit of an homage to classic, underground heavy metal. It's a simple and direct name. We don't have very many bands playing epic, sword-and-sorcery and doom-inspired heavy metal in Canada. I can think of three, including us (The others being Funeral Circle and Cromlech). In a way, I see us as defenders of ancient heavy metal in a continent dominated by triggered blast-beating, nauseated growling and sweep-picked wankery.

Why do you work with a label from Portugal, given that you are Canadian?


Francisco from A Forja Productions and I were in touch before signing Gatekeeper, and I had bought many of his previous releases. After exchanging a few emails, he decided to offer Gatekeeper a CD release, and we're very pleased and excited with how things are turning out. More than that, we are also working with Deathrider Records from Germany for a vinyl release, which comes out of April 19th at the Keep it True festival, so Gatekeeper is very international at this point.


One of the good things about this modern era of music that is geography is no longer our master. Epic heavy metal is a niche style, and it's fans are spread out across the world so I think it's great that we can keep in touch via E-mail or Skype or even Wastebook to organize releases, gigs, festivals or whatever. United we stand!

Which artists, not necessarily musicians, would you consider your peers?


For newer bands, we are big fans of Olórin, Ravensire, Funeral Circle, Gatekrashor, Striker, Borrowed Time, and many others. We're also really into Atlantean Kodex, Argus and Procession, etc but those bands have been at it a bit longer.


For non-music, that's a tougher question because I'm still getting through all the old stuff! Coven Illustracion designed a Gatekeeper shirt and Ralph L. Torres is the man behind our cover artwork for Prophecy & Judgment. Both those guys are fantastic artists. Lindsay Grimm and Kefkism Design are two great photographers in Edmonton, Lindsay did the promo photos for our upcoming EP, and she's incredible at live shoots. Kefkism does very cool work with female models. For current writers I was following Black Gate magazine and I think Heroic Fantasty Quarterly is also worth checking out, they often bring in newer authors with good stories.

Are the "Swan Road Saga" and "A Tale Of Twins" stories you made up by yourselves?


No, “Swan Road Saga” is based off Beowulf and Grendel, and “Tale of Twins” is based off the Lay of the Volsungs from Norse Mythology. I must credit Tolkien with that, because I was inspired by his re-telling of the saga in the style of Norse Poetry, when the original tale is based in prose.
I do some non-music writing for fun once in a while, but I like writing songs based on existing work, it's fun to come up with ways to retell a story that are familiar, but not overly derivative. Hopefully people that know those stories will figure it out, and people that aren't will get curious and do some research.

Can you imagine to ever write lyrics with a contemporary background instead of fantasy- and mythology-based stuff?


I don't know. As the lyricist of Gatekeeper, I think that the closest thing to “real life” that I can get would be songs based on history and past events. It would be hard for me to write more contemporary themes, the words would feel so mundane. Maybe if I could write like Alan from Primordial or Martin from Skyclad/Sabbat...


On the other hand, our song “Prophecy & Judgment” deals with the Oracle of Delphi from Ancient Greek history. The whole thing is wreathed in a veil of legendry and myth but the temple of Apollo in Delphi is a real structure that you can visit, and the oracles actually existed. Some of the prophecies are even written down, I lifted some lyrics in our song from English translations and re-arranged them to rhyme. What I'm getting at is that much of our mythology came from somewhere, right? Lots of the legends are based on real people and real events, though they have been blown into larger-than-life proportions. It's that sense of wonder and mystery, romanticizing about a world lost and far away that drives me to create.

What is the constant appeal in fairytale and lore, which we find in a lot of Metal from the past as well as the present? Is it mere escapism, or can we maybe learn something from these things with respect to our own reality?


I think it's a bit of both. I'm a massive aficionado of fantasy, sword and sorcery, sci-fi and horror, and it's a way to escape the dreary slog of work, buying groceries, fixing the car, dealing with boring unintelligent people on a day to day basis. At the same time, some of the best work in genre fiction are metaphors, ideas or critiques about the world we live in today and the direction we might be heading. Slaves and gladiators killing each other in the arena and gang wars in post-apocalyptic New York might be entertaining in the movies, but there are parts of the world where that is a reality, which is frightening.

The title "Prophecy and Judgment" sounds quite deep and seems to be open for interpretation: What do you want to express with it?


As I said in an earlier question, that song (as well as the cover art) is based off the Temple of Apollo and the oracle of Delphi. In the days when the temple was in use a wide range of worshipers from peasants to kings would seek the oracle's counsel. Try to imagine the feeling that one must have felt back in those days: The awe, fear and trepidation in the shadow of that ancient building where young women raved under the influence of the gods and priests lurked in the background. Imagine the Spartan and Athenian war counsels treading the temple steps, fully believing that their struggles and battles were in the hands of a power beyond their understanding. That's the best I can explain it.

Tell me a bit about your local scene, as in connection to Canada, we mostly hear about bands from either Quebec or British Columbia.


Edmonton and Alberta in general is not a well-known music or heavy metal hub, it's oil country out here. Some of the bigger underground impacts have been from “war black metal” bands playing in the style of Blasphemy. Revenge is an example of that. We also have Begrime Exemious. Otherwise, it's mostly death metal and thrash, and way to many people call their band “progressive.” Of course, there are some good bands, like Death Toll Rising, Dire Omen and The Noumenon.


My favorite local band is Striker from Edmonton. I also like Hrom, a great speed/power band in the vein of old Helloween and Chroming Rose. Also, Gatekrashor are very fun, dirty speed metal. Keep 6, Ironstorm, Tessitura and Bardic Form are the other bands of my bandmates and they are very good, all different styles.

What are your further plans; will you look out for a bigger label to promote you, or do you prefer to stay in the underground, if something like that still exists?


I think the underground still exists, though it's a different situation than before. In fact, the “true metal” scene in North America is about as underground as it gets right now. I'm not terribly concerned with what label we work with, our current labels are fantastic and we are not in a hurry to jump ship. However, we're open to working with any label that is a proper heavy metal label and can offer a deal that keeps both parties happy. Gatekeeper is a side-project for everyone, we all have other bands plus work and/or school. We are hoping to have new music released by the end of 2013, maybe in the form of a split release or another EP. I would also love to do some live stuff. We'll burn that bridge when we cross it!

Transcribed by Gatekeeper at 01:55 No comments: 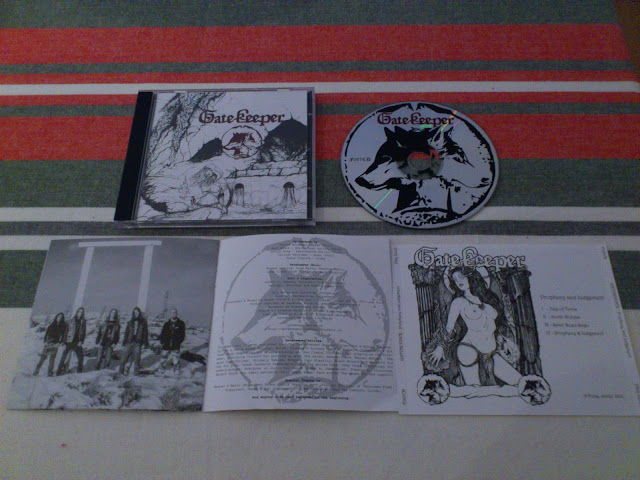 Pre-ordered your copy yet???

http://aforjalabelmailorder.bandcamp.com/
Transcribed by Gatekeeper at 08:43 No comments: